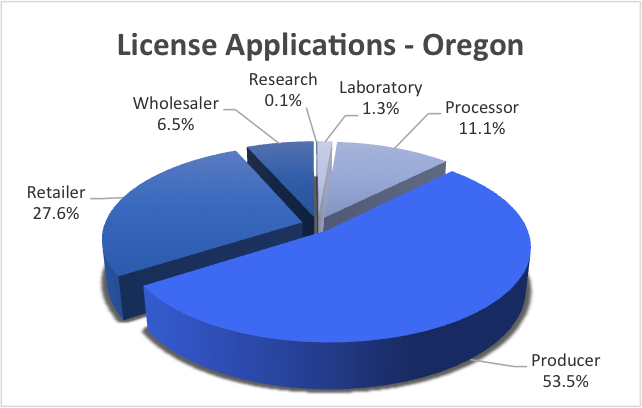 With a population of just over 4 million, Oregon lies around the middle of the pack in terms of state size. Though it was one of the earliest adopters of legalized recreational marijuana, it may not have received the same press or interest from recreational cannabis investors as other states due to the small size of its market, especially when compared to its gargantuan neighbor to the south, California.

In January 2017, however, Oregon passed its “latest marijuana milestone: the end of recreational sales at medical marijuana dispensaries. The big shift ends stopgap state permission for dispensaries to sell marijuana to anyone over 21 as regulators spent the past year and a half drafting rules for the new recreational market.”[1] Now that recreational users are no longer allowed to access cannabis products through medical dispensaries, they are being forced to buy from recreational stores instead, which has already generated a great deal of new demand at the recreational marijuana shops currently operating around the state.

Furthermore, given that the process for attaining and maintaining a medical marijuana card in Oregon is both cumbersome[2] and expensive (the standard application fee is currently $200), the number of medical patients in the state is naturally limited. Due to these limited numbers, per Brad Zusman, owner of Cannadaddy's recreational shop (as quoted in The Oregonian[3]): “Nobody is going to survive being medical only”. While this series of legal events has been devastating to medical marijuana dispensaries, it is a boon to recreational stores around the state, and to those looking for a great opportunity to join or invest in the Oregon rec market.

However, the transition to a recreational market has not been without its issues. A lack of approved testing facilities and strict testing standards have led to supply shortages and many infused product manufacturers unable to sell to dispensaries. This is causing a severe strain on manufacturers and dispensaries alike.

Still, for those who can be patient as the recreational market works out its kinks, vast potential awaits. According to Brightfield Group analysis of NSDUH data, there are more than 570,000 adult cannabis users in Oregon, and one of the highest incidence rates in the United States. Until the launch of the recreational market, medical marijuana dispensaries were serving a population of less than 75,000 medical marijuana cardholders. Even though recreational cannabis users will not begin purchasing from the legal market overnight, investors can expect a strong influx of users to recreational cannabis stores for years to come. Sales for Oregon's cannabis market are projected to hit $465 million in 2017, up from only $123 million in 2014, the last year that recreational sales were completely restricted in Oregon.

Though there are nearly 2,000 applications currently open for various marijuana licenses in Oregon (broken down by type in the graphic above) [5], new applications are being accepted by the state, thus interested investors may still be a part of this unique and profitable market.

[5] Graphic and figures based on Oregon Liquor Control Commission data as of January 10, 2017. http://www.oregon.gov/olcc/marijuana/Documents/mj_app_stats_by_county.pdf