Competing as an Edibles Brand in the Changing Nevada Market 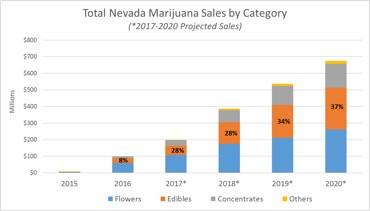 Sixteen years after marijuana was approved for medical use, Nevada residents voted in favor of the Nevada Legalization Initiative. The initiative allows for the sale of recreational marijuana by the start of 2018. However, the Department of Taxation already has plans to get recreational products into dispensaries by July 1. This is a significantly faster timeline than that of medical marijuana. While medical marijuana was technically legalized in Nevada in 2000, the legislature did not approve a regulatory framework for the large-scale production and distribution of the plant until 2013.  The first dispensaries opened in 2015, but due to issues with product testing and licensing, the industry had a relatively long ramp up period.  Since then, medical marijuana sales in Nevada have been doing extremely well and is projected to continue doing so with the introduction of recreational marijuana.  As a result, total marijuana sales in Nevada are expected to double by the end of this year (101%), with the subsequent year showing a similar level of growth (98%). Flowers make up a large proportion of total sales, with Edibles and Concentrates beginning to increase their shares with the start of recreational sales.

The Edibles market in Nevada is projected to increase steadily in the coming years, with the bulk of sales coming from the Sugar Candy, Chocolate, and Baked Goods subcategories.

With less competition in the Nevada Edibles market last year, Trokie had close to half the market. As more brands enter the market, brands such as Trokie and Evergreen Organix’s shares are declining. These other top brands each claim 10% or less of the Edibles market, with several of them having slightly increasing shares.

As the Nevada marijuana market opens to recreational use, brands will need to re-evaluate strategies to remain competitive and capitalize on the expanding legal cannabis market in one of America’s top tourist destinations. Trokie’s product line currently only includes medicated lozenges, while brands such as Incredibles and Dixie offer a more diverse product line, including Sugar Candy, Chocolate and Drinks (Dixie), in different flavors and strengths. Consumers across all regions are looking for items like concentrates and other forms of edibles so diversification should be a priority. Distribution will also be key as big brands such as Dixie find their way into dispensaries, both current medical and newly established ones. Smaller brands or new ones looking to enter the Nevada Edibles market will need to work diligently to establish their distribution networks to catch up with those brands that are currently more established in this market.