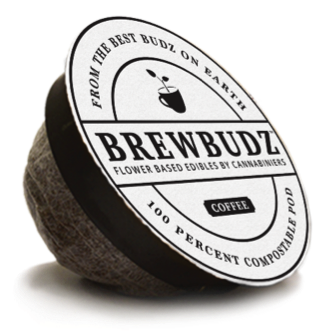 Imagine you’re at your closest friend’s house to unwind after work one afternoon, and she asks you what you’d rather drink —a glass of rosé, or herbal tea infused with whole plant cannabis. Or you’re running late for work, and realize you forgot to take your dose of cannabinoids. Rather than rub your achy shoulder all day, you sip your morning cannabis-infused coffee during a meeting, knowing the discreet drink will get you ready to take on the day.

Seem a bit far-fetched? Not to emerging cannabis manufacturers who are reimagining the industry. Morning coffee, going for a beer with friends—these are the everyday adult rituals cannabis drinks manufacturers are elbowing their way into. Cannabis-infused drinks are one of 19 distinct subcategories of goods that contain marijuana flower or extracts from it, with a 2017 market value of $163 million. Brightfield Group projects drinks sales will grow by more than 250% by 2021—double the growth rate of flower itself. In addition to coffee and tea, cannabis can be found in sodas, energy drinks and shots, lemonade, punch, and everything in between. Coffee drinks, sans cannabis, are already a $37 billion-dollar industry in the US[1], and now marijuana manufacturers are aiming to get in on the game.

Brewbudz  is one such company. They envision the further normalization and socialization of cannabis use, whether it’s as medication or a way to have a good time, and they see healthier drinks as playing a big role in this. The company specializes in a line of cannabis-infused coffees, teas, and cocoa, and launched in Nevada in August 2017. They have plans to move into all recreational states by the beginning of next year.

The company’s vice president, Jeffry S. Paul, told Brightfield Group that their differential advantage is their patented flower-based extraction method. Instead of extracting individual cannabinoids into a cannabis oil, their process maintains the molecular links between the cannabinoids and terpenes that produces the highly touted ‘entourage effect’, which is thought to produce the most effective, potent medical effects.

Brewbudz chose to infuse coffee because they noticed that the edibles market was full of sugary snacks, and wanted to make something that was healthier and more commonly consumed. “How many adults do you know who eat gummy bears?” said Paul. “When you go out with friends, what do you do? You drink something.” He observed that if the marijuana market is to grow, especially in recreational spaces, products will need to evolve to be more appealing to folks who may have never partook when cannabis was illegal, by fitting into the hobbies they already love best.

Part of this new appeal involves providing a less potent high for those that want to consume casually and socially. For this reason, Brewbudz has a focus on microdosing, both for recreational consumers and medical patients who want to progressively dose throughout the day. They also carefully mix premium blends of plants to achieve different psychoactive effects and flavor profiles: energizing black tea and coffee with sativa, and relaxing herbal teas and decaf coffee with indica.

Coffee and tea are outliers in the edibles industry—which is dominated by baked goods, chocolate, candy, sugary drinks, and salty snacks—in terms of being low calorie and low sugar. There is already a sizeable niche of cannabis consumers who are health-conscious, want quality ingredients, research their products well, and—good news for product manufacturers—greatly outspend other user segments, as Brightfield Group discovered in recent consumer surveys.

And if the packaged food industry at large is any indicator, health-conscious consumers are a growing segment. In the past decade, increasing demand for whole, natural ingredients has been disrupting industries that were once mainstays of American food culture: sales of full-calorie soda have fallen by more than 25 percent in the past 20 years[2], and sugary cereal sales fell 17% from 2009 to 2016.[3]  Preferences for healthier options across the board have had staying power, forcing manufacturers to innovate to make less processed, more wholesome options. As the edibles industry matures, it may see itself facing a similar dilemma. Healthier lines of food could usher in new customers, and sugar-free, low-calorie coffee is a prime option.

Besides Brewbudz, there are a considerable number of other manufacturers who have identified coffee as a market rife with potential. House of Jane was the first large scale coffee brand, and is currently one of the top brands in the drinks subcategory, with 7.7% market share in California and 18.1% in Nevada in June 2017, according to Brightfield data. Other newcomers are emerging onto the scene as well, such as Bay Area-based Somatik, who recently came through the Gateway cannabis business incubator with their cold brew coffee.[4]

Since recreational use was first legalized in Colorado and Washington five years ago, the industry has increasingly shaken the habits of its black-market roots, when homemade brownies with questionable dosages were the norm, and consumption largely required sneaking and smoking. Of course, there’s still a ways to go, but if innovative brands like Brewbudz have any say in it, the future of cannabis consumption will be easier, healthier, and as normal as your daily cup of joe.