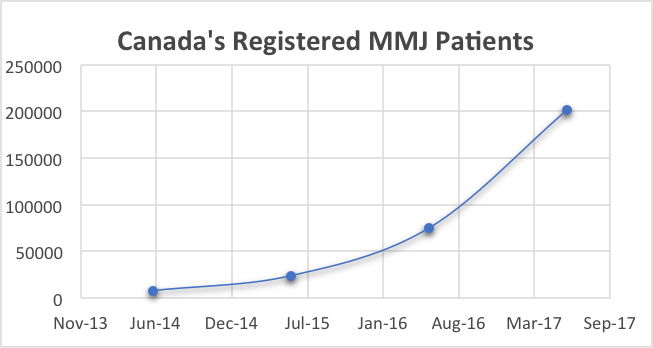 While all eyes have been fixed on Canada as the country prepares to legalize recreational marijuana use and sales in July of 2018, the less news-worthy but still highly valuable medical marijuana market is taking off in the country. The number of patients registered has skyrocketed – going from approximately 8,000 to over 200,000 in the period of just three years. Access has also been expanded as a result of the dramatic decrease in government turnaround time on authorizing Licensed Producers (LPs), boosting the number of LPs to 58 across Canada as of September 2017. Though medical marijuana has been legal in the country since 2001, extremely limited LP licensing (and thus cannabis supply), as well as the rigorous application process formerly required for patients to attain product, had been largely impeding access to legal medicinal cannabis across Canada.

The country has struggled with a vast black market and by legalizing adult-use and medical marijuana, hopes to draw illicit users out of the shadows and into the formal market, as well as regulating cannabis use. Making marijuana access a reality for more medical patients has been a step in the right direction, but even today, only half a percent (0.55%) of the population is enrolled – a figure that is likely still lagging behind the actual number of those currently using or interested in using cannabis products for medical purposes in Canada. For comparison, Brightfield Group data for the comparable U.S. market show approximately double this number of medical marijuana patients enrolled, relative to the population size.

If Canada hopes to truly diminish or eliminate the black market for cannabis, it must continue along this path, going beyond simply legally permitting sales and use, and being sure to enact policies that make access and affordability a reality for those seeking marijuana – both medical and recreational. As today’s soaring medical patient numbers demonstrate, without a straightforward path to cannabis access, patients were simply not able or inclined to enroll in Canada’s medical marijuana program in the past, despite their clear need and desire for product. This supports the notion that without intentional and strategic policymaking and implementation, cannabis laws do not serve their ultimate purpose of getting people appropriate and safe access to products, which incentivizes discouraged users to remain on the black market.

Given that much of what has occurred in the medical realm will translate to the recreational realm, Canada’s federal government and its provinces have an excellent opportunity to take the lessons learned in the medical market over the past 16 years and use them to design effective policy ahead of next July’s recreational cannabis debut.