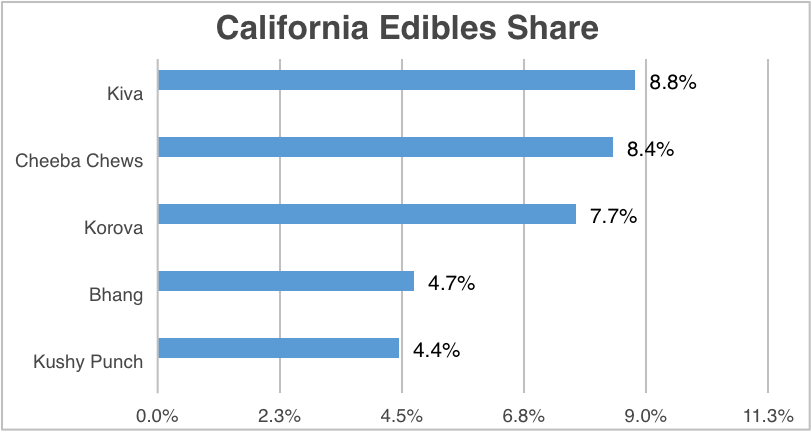 Analysis results for November and December demonstrate the continued dominance of Kiva and Cheeba Chews in edibles, Moxie Seeds & Extracts in concentrates, and Emu 420 and Mary’s Medicinals in the topicals market. However, some smaller and newer players are starting to climb the ranks in a variety of subcategories, most notably Whoopi & Maya whose sales are taking off in both chocolates and topicals.

At the category level, the top five brands remain largely stable, with Kiva Confections (8.8%) taking the category’s leading position from Cheeba Chews (8.4%) in December. Cheeba has been gradually losing share throughout the year, while Kiva’s recent launches of their CBD bar and Petra mints have helped boost them to the number one slot. Korova (7.7%) with their extra potent baked goods maintains their third place position, trailed by Bhang (4.7%). Sugar candy maker Kushy Punch (4.4%) overtook rival Edipure (4.2%) for the first time in December to enter the top five brands of edibles.

After drastically losing share earlier in the year, TKO Edibles has been rebounding its share in Baked Goods to reach 12.2% of the subcategory. Bhang maintains its second place standing in chocolates but continues to lose share to Kiva, Liquid Gold and Venice Cookie Company. Altai has continued to lose share month on month throughout 2016 as well, reaching only 3.4% of chocolates in December, compared with 7.6% in January. Whoopi & Maya’s chocolates are still low in the rankings statewide but have been growing very quickly, particularly in December, and at this rate will break into the top ten in early 2017.

Most established concentrates brands (including Eureka and Bhang) are gradually losing share each month, as new players enter and the field becomes more competitive – our analysis reveals that the number of concentrates brands actively listed by online dispensary menus across the state has nearly doubled between January and December of 2016.

Topicals is the most dynamic category in California cannabis this month, with established players losing share and newer players gaining. Emu 420 (21.7%) remains far and away the market leader, but second place Mary’s Medicinals (8.9%) has been losing share month on month, with competitors Mary Jane’s Medicinals (6.3%) and Apothecanna (6.0%) climbing in the ranks. The brand to watch in the topicals space is Whoopi & Maya (8.7%), whose distribution exploded at the end of 2016 and jumped to the number three spot in topicals by December. The brand is wildly popular with women, particularly in the Bay Area, though the brand made a strong push into southern Californian dispensaries in Q4 of 2016.

Data is based on our multi-source methodology, which includes surveys with thousands of California medical marijuana patients, menu audits of hundreds of dispensaries across the state, and in depth interviews with dispensary owners, among other sources.

Data in this article will differ from previous reports based on adjustments made to our internal algorithms that cover current and historical periods. For more information on our methodology, for additional brand, market and consumer insights in the cannabis industry, or for custom research needs, visit us at brightfieldgroup.com or reach out at contact@brightfieldgroup.com.