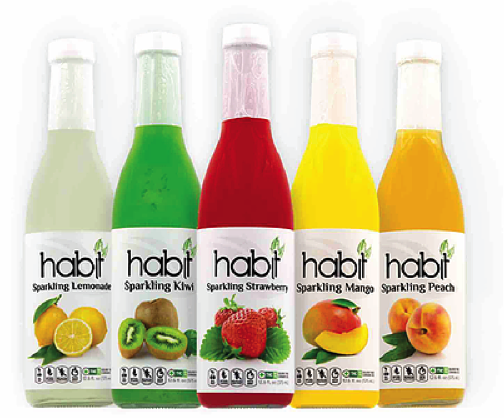 Like many canna-businesses, Habit began as an operation running from a garage – essentially, an experiment and a dream. After a number of failed attempts at successfully carbonating and flavoring their sodas, the small team finally figured out the magic combination.

With its new carbonated beverage product prototype, the southern California company decided to enter the High Times Cannabis Cup in 2016. Entering the product required clearing out their local grocery store of all its carbonated water two-liters, performing the ethanol extraction process the team had toiled over and perfected, adding in their fruit syrups and pouring the mixture into bottles to provide to the judges – an all-day process. But in the end, it was worth their efforts. The soda was so tasty that it won “Best New Drink” at the Cup, boosting the small and streamlined team and its products into the limelight, and making Habit a force to be reckoned with in the California cannabis-infused drinks market. Based on data collected by Brightfield Group, in fact, today Habit is among the brand leaders in the drinks subcategory in the state, having progressed from a mere 2% to over 10% market share during the first half of 2017 alone.

Growth figures aside, the Habit team has remained relatively small, today consisting of 12 employees, seven of whom are fully committed to the labor-intensive process of producing their flagship soda products (now called “sparklers”). Despite its lean staffing, Habit has had the capacity to greatly expand its product line, branching out to offer concentrates, cartridges, precisely-dosed edibles, and having just launched a site featuring its CBD-only products, including CBD waters, tinctures, and topicals.

The company aspires to maintain a sophisticated brand and products that fit seamlessly into a professional lifestyle – offering consumer goods that people are accustomed to, which easily and discretely make up part of a regular daily routine, and which can be consistently dosed. For example, customers will reportedly enjoy a Habit soda after work instead of reaching for a six-pack of beer or unwinding with a glass of wine, easing the transition from alcohol to cannabis and allowing consumers to control their amount of substance intake – qualities very much appreciated by Habit’s clients.

Habit has also insisted on using natural and safe ingredients in its products, still generating sparklers flavored with fruit syrup that contains actual fruit - a novelty in an industry dominated by less expensive high fructose corn syrup substitutes - and offering fully organic, sugar-free tinctures. Without the Food and Drug Administration regulating inputs, it is up to individual cannabis companies to police themselves – and Habit does just that: lab testing all raw materials before sending them out to market. Though this process is expensive and time-consuming, Habit’s high standards set their products apart from the competition and have put them a step ahead in complying with new regulations for legalized recreational marijuana sales in California. Along the same vein, Habit staff are currently working in collaboration with distributors and other partners to ensure compliance with said regulations. Despite Habit’s already-high standards, succeeding in the newly opened market will entail (among other things) scaling up their operations, updating packaging and recalibrating dosing where necessary or beneficial.

Though today the company sells exclusively via distributors throughout the state of California, they hope to eventually expand to other states in the western region, such as Washington, Oregon and Nevada.  But for the time being, the Habit team anticipates that the sales growth stemming from California’s January 2018 rec legalization will be enough to keep them busy. Given that the size of the state’s cannabis-infused drinks market is projected by Brightfield Group to expand nearly five-fold over the upcoming several years – from an estimated $35 million in 2017 to nearly $160 million in 2021 – planning for a dramatic increase in demand for infused drinks is a sensible strategy.

Habit has a solid menu of products to offer to a market not yet highly saturated with beverage companies, and its leadership have put in the preparation and forethought to adhere to California’s new rec regulations – giving it excellent potential to thrive in both the state’s medicinal and recreational drink markets. If the company can overcome production limitations and adequately ramp up staff and supplies to meet the rapid and significant increase in recreational demand, it is well-positioned for growth far beyond that stemming from the medical marijuana customer base it has already generated.