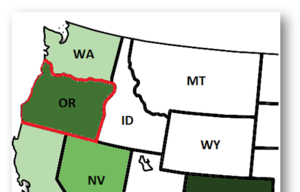 Oregon residents´ regular cannabis use is a great sign for investors targeting Oregon, as heavy users drive the vast majority of volume in the marijuana market. Given the large quantity of marijuana users currently purchasing on the black market, sales figures should continue to rise more rapidly in the state than they have in other new recreational markets.

While local governments in Oregon are permitted to enact bans on commercial cannabis activity, current and potential cannabusinesses in various areas of the state remain somewhat protected because Oregon is presently only allowing cities and counties to enact bans if 55% or more of local voters opposed Measure 91 (which legalized recreational cannabis sales). The window for local governments to enact bans will close in December 2015.  While Oregon as a whole is perceived as very liberal, its liberal voters and residents - including the champions of the marijuana movement - are mostly restricted to the major population centers. A vast expanse of the state is made up of rural, conservative counties with less concentrated populations and less propensity to accept marijuana. For this reason, retail consumption and production will most likely be consolidated in large liberal areas more friendly towards cannabis, which may lead to oversaturation in these regions and sparsity in rural, conservative areas.

Some local governments in more conservative areas have found a way around this hurdle by opting to enact regulations in lieu of bans.  For example, in Grants Pass, a town of roughly 35,000 in the southern part of Oregon, the city council recently approved a new ordinance requiring that all marijuana be grown indoors.[1]

It is highly advised, therefore, that those interested in investing or expanding in Oregon markets remain keenly aware of local politics and historical attitudes toward marijuana, as these may prohibit, curtail or facilitate business operations in certain regions.

Cannabusinesses looking to enter the dispensary space should be highly aware of the competition they will face in the market. Investors would be wise to create a sound and strategic business plan before diving into Oregon´s recreational marijuana industry, where competition will be fierce – especially during the first few quarters of sales when hundreds of companies with competing pricing will still be crowding the market and taking up market shares.

Companies that survive the first few crucial years should be set to benefit greatly from this small but steadily growing market.