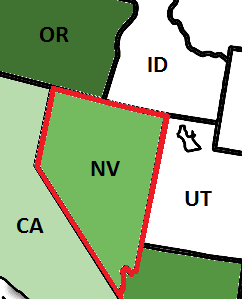 Although medical marijuana has been legal in Nevada since 2000, the first brick-and-mortar dispensaries did not open up in the state until August of 2015. Up until very recently, most of the legal market supplying the state’s medical patients was dominated by homegrown cannabis delivery services.

Now that the state is licensing dispensaries, Nevada has garnered new attention from many companies looking to invest in the industry.

o   Nevada is one of the few states that allow medical marijuana facilities to be for-profit and allows out of state cardholders to purchase from Nevada dispensaries. As the market is currently largely untapped (see chart below), this provides numerous opportunities for investors.

o   Dispensaries in the state have the unique opportunity to capture tens of thousands of visiting medical patients. Las Vegas alone attracts more than 40 million visitors a year, providing a potential gold mine if any small percentage of visitors are cardholding patients from in- or outside the state.[2]

o   At the close of 2015, there are only six operational dispensaries in the entire state (with three more about to open), leaving plenty of licenses potentially available for sale.[3] The most current Nevada licensing numbers look like this:

o   There are varying opinions on whether cultivation licenses or dispensary licenses are worth more. With the low number of dispensaries currently allowed in the state, some believe those permits are more valuable. But with the strong possibility that recreational marijuana will be approved next year, cultivation permits could potentially skyrocket in value.[4]

Nevada´s governor signed a law in June, 2015 allowing the transfer of medical marijuana permits, which has created a secondary market for them. Those licenses that are on the road to certification but still considered potentially available may not necessarily go up for sale as this is subject to the will and interests of their current holders. Licenses are, however, periodically becoming available to those interested in purchasing them.

o   Investors should note that this is still considered a “seller´s market”, as there are more licenses in demand than in supply,[5]and prices may be inflated.

o   The prices of MME licenses on the secondary market have also fluctuated dramatically over time,[6] thus investors should be aware of potential volatility in the market and proceed with caution when purchasing licenses.

The state has opted to enforce strict testing requirements. So strict, in fact, that they forced the first dispensary that had opened in Nevada to close its doors temporarily due to a lack of inventory. Much of the cannabis the dispensary purchased from a licensed grower reportedly failed to meet the new requirements at a local cannabis testing lab.[7]

While this is a huge plus for consumer health and safety, it may posit some challenges for dispensaries as well as cultivators and producers. Investors looking to expand or create cannabusinesses in Nevada should be keenly aware of regulations on quality, and how they will influence prices and availability of product.

The medical market outside Las Vegas, Henderson and Reno is currently negligible, with 7,081 medical card holders registered in Clark County (Las Vegas, Henderson), 1,406 in Washoe County (Reno), and only 1,682 in the rest of the state.[8]

While cannabusinesses in Clark will likely get by far the most foot traffic from patients and tourists, they will also face substantially less competition for licenses and customers in most other regions of the state.

Nevada offers a unique opportunity to new investors who are willing to shop around and bide their time in order to purchase a license when the price is right. There is great potential for current and potential cannabusiness in the state, with a small but growing market of local MMJ patients, as well as the prospect of recreational marijuana legalization right around the corner - which would allow businesses to tap into a massive tourism industry and client base.