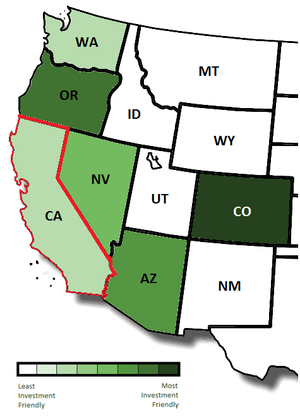 However, backed by a 2013 California Supreme Court ruling, cities and counties have wide discretion to ban almost any medical cannabis activity. About 200 California cities have an outright ban on marijuana dispensaries, and around 50 offer avenues to legitimize dispensaries.

California’s enormous population and lenient list of qualifying conditions give it a considerable base of medical marijuana patients. With a coherent regulatory system on its way and a recreational measure expected to pass in 2016, California’s cannabis market offers exciting opportunities for existing California cannabusinesses and new companies looking to enter the space.

It is worth noting that while California is known for its liberal attitudes towards the plant, actual consumption rates amongst Californians is actually lower than in many other states on the forefront of the legal cannabis industry.  According to an NSDUH survey, fewer than 22% of 18-25 year olds and 7% of adults 26 and older in California report using the plant in the past month compared with:

Furthermore, Brightfield Group survey results show that only one in three Californian medical marijuana patients use the plant daily, far less often than their counterparts in Oregon and Colorado.

The main issue with the market in California was a lack of a coherent regulatory environment, which left businesses subject to frequent intervention from federal drug enforcement or prosecution.  However, this should not continue to be a problem for California businesses over the long term as a new set of regulations was signed into law in October, establishing procedures for licensing cannabusinesses and a taxation structure.  The regulations allow for chains of retail locations to be established or vertical integration with a limited number of dispensaries and while opportunities exist for new players to enter the market, existing companies are given a significant advantage.

These regulations will allow existing companies to expand dramatically in scope, developing chains of dispensaries around the state.  This will be a game changer for manufacturers as well, as a published list of dispensaries and the development of larger chains will greatly streamline their distribution process.

Branded edibles, concentrates and other infused products offer strong opportunities for established companies from other states or entrepreneurs looking to gain a foothold in California.  While there are a number of strong competitors already present, particularly in the edibles space, the top ten companies make up less than 25% of total sales in edibles and less than 15% in concentrates, leaving plenty of space for new investors.

While there are many challenges facing cannabis businesses in California and year-on-year growth for the medical market is limited in percentage terms, given the size of the market, even single digit growth translates into a hundred million dollars.  Recreational cannabis is expected to pass in 2016 and the potential market size here is massive.  World’s 8th largest economy - which has a strong cannabis culture - legalizes recreational weed? Possibilities for growth are tremendous. The state already has the world’s largest legal cannabis market and sales will triple in the next four years. Total market size in 2015 for all of California is $1.5 billion.  Projected market size for 2019 is $4.3 billion.

There will certainly be issues and risks undertaken by entrepreneurs and not everyone will succeed, but until now even the biggest fish in this pond are only mid-sized companies – leaving plenty of room for new and expanding businesses in this vast market.