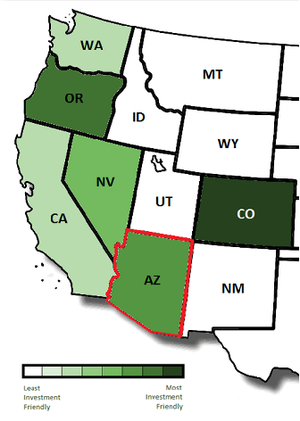 Medical marijuana was legalized in the state in 2010, winning approval by a very slim margin, though the first Arizona dispensaries did not open until in late 2012.

The Arizona Marijuana Legislation Initiative, which would legalize recreational marijuana possession and consumption for those 21 and up, is very likely to appear on the November, 2016 ballot in the state. However, there is still heated debate about whether the measure will pass.  If recreational marijuana possession and consumption are indeed legalized, sales are expected to skyrocket – more than quadrupling by 2019 to $700 million dollars - a tremendous market for investors to capitalize on.

Those considering investment in Arizona-based dispensaries have two incentives to invest:

Investors in marijuana grows and manufacturing operations in Arizona, on the other hand, are still facing steep barriers to entry and their investments are generally riskier.

The state has no limits on cannabis production - and no publicly available information that marijuana growers can analyze before pursuing expensive grow operations.  Though strong market growth is expected to continue, and 2016-17 may bring a flood of new recreational users to the market, current and interested cultivators should be wary of potential gluts and price instability in the cannabis market.

[8] Note that in order to cultivate or manufacture cannabis, investors must also have a license to operate a dispensary. However, dispensaries are not subject to this provision. Each dispensary is allowed one property to grow marijuana, but there is no requirement that they cultivate any of their own product or operate a grow facility.http://www.azcentral.com/story/news/arizona/politics/2015/03/21/arizona-moving-toward-toward-medical-pot-glut/25170547/