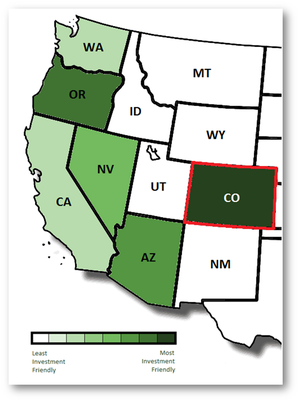 Colorado placed strict new microbial testing rules on the rec industry in October 2015 and growers have reportedly seen up to 70% of the wholesale recreational product in the state knocked out of the market due to producers’ inability to meet these new requirements.[1] This lack of inventory has caused prices to skyrocket, exacerbating price instability concerns. Investors should be wary of current prices, which are expected to steadily fall as cannabis producers begin to meet the new testing requirements.[2]

To date, however, Colorado has licensed hundreds of dispensaries throughout the state.[1] As Colorado's regulatory and enforcement system matures, many of these jurisdictions are expected to begin allowing licenses. This will enable established retailers to expand and new retailers to open in formerly untapped markets.

This phenomenon may have been due to the limitations placed on licensees by the recently-lifted vertical integration requirement, which did not allow businesses to excel in any specific area (e.g. production, sales). Now that cannabusinesses are free to specialize, larger chains, more powerful brands and stiffer competition will become a new reality in Colorado’s marijuana market.

For the moment, though, investors face few barriers, a welcoming public and a huge, legal marijuana market. Despite its relative maturity in the cannabis industry, Colorado remains an excellent choice for those looking to create or expand cannabusinesses today.