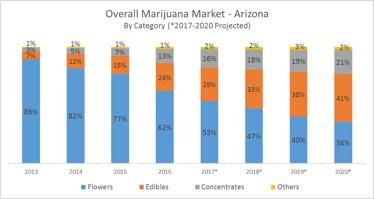 With the rejection of Proposition 205 by voters this past November, Arizona dispensaries are still only able to sell marijuana products for medicinal use. Arizona marijuana sales in 2016 increased by 44% over 2015 – growing from $217.6 million to $312.9 million. The CAGR over the 2016-2020 period is estimated to be 14%.

Over the years, Flowers have made up the majority of total sales. However, it is trending downward and is projected to only make up approximately a third of sales by the end of 2020. Although less than the growth of Concentrates, Edibles is expected to increase its share of Marijuana sales in Arizona by over 70% by the end of 2020.

Over the past year, there has been some movement among the Top 10 Edibles brands in Arizona. YiLo, once the top brand with a quarter of Arizona’s Edibles market share, decreased its share of the market to 16% and lost its top position to Infusion Edibles. Baked Bros has climbed its way to 3rd place (11%) after being ranked 10th a year ago (2%). Over the past year, Bhang has decreased its share of the Arizona Edibles market by half (14% to 7%). Bhang’s edible offerings are primarily chocolate which may be contributing to their decline in market share since many of the other top brands offer a wider variety of edibles. In addition, the Chocolates category is projected to decline slowly which may further negatively affect Bhang’s market share in the Arizona Edibles market.

Compared to a year ago, the markets shares of the top Edibles brands have begun to somewhat converge, likely resulting in a higher level of competition. Brands competing in the Arizona Edibles market will need to be ready to claim and protect their market share as the competitive landscape continues to evolve. It was only a 2% margin that prevented Proposition 205 from being passed and a PAC has already been formed to get the initiative back on the ballot in 2018.